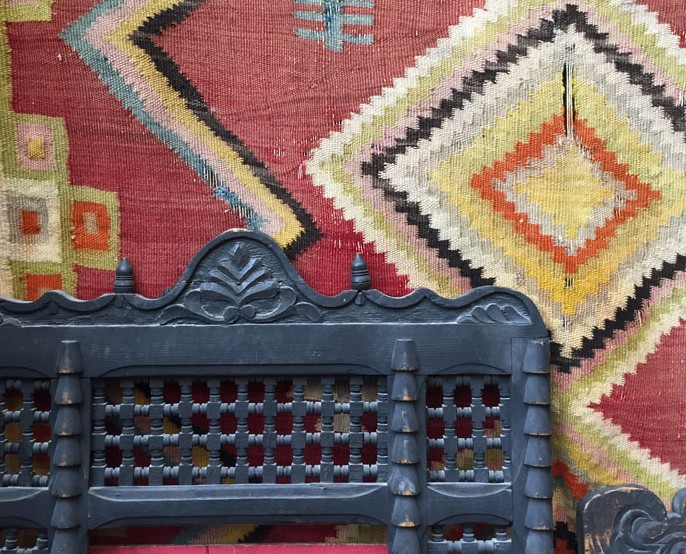 Highlights: This 17-night trip focuses on textiles and arts of Morocco but also emphasizes architecture, culture and cuisine. And we’ll take in 8 UNESCO World Heritage sites. Travelers are very welcome in Morocco; the country is peaceful, and no visa is necessary for most visitors.

This trip takes you behind-the-scenes with a small group of friendly people to share an authentic experience of Moroccan hospitality. The itinerary is special because although we visit justifiably popular sites like Marrakech and Fes, we’ll spend more time in authentic Berber villages and in the Atlas Mountain regions than on other trips. We’ll meet Berber women making rugs, have a cooking class with a local family, admire the date palm plantations and buy dates from the farmers in this beautiful region. 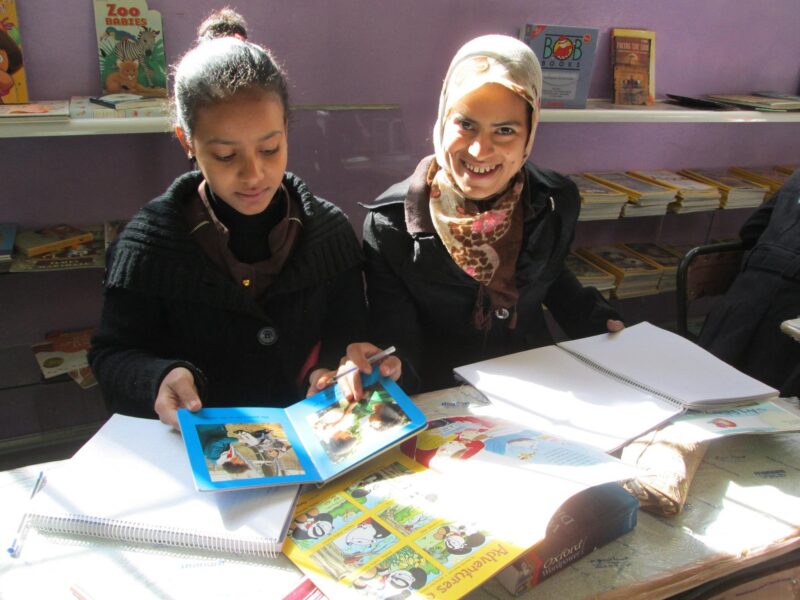 Girls look over books in a new Olive Seed library in a remote Moroccan village; We will take books and visit.

Charming hotels called riads or kasbahs (in the desert) will be our home bases. As we travel, we’ll explore the historic walled ksars, watch craftsmen at work, and poke around in the traditional little souks for spices and other treasures to take home. Moroccan food is divine, in case you aren’t familiar with it. In cooking classes, we’ll put our spice knowledge to work and create a delicious lunch that will include salads, vegetable dishes, crusty bread and tajine, a typical, succulent vegetable stew, with or without meat. Everywhere we go, our guide (a bit of a foodie himself!) will show us the best places to eat, the hidden corners to visit and the most interesting people to meet!

We’ll start this marvelous adventure by flying in to legendary Casablanca. We’ll meet you at the Mohamed V International Airport in Casablanca (CMN) on September 7. We’ll check in to the hotel, and get a good night’s rest. (At the end of the trip, we’ll return to Casablanca, enjoy a Farewell Dinner and stay our last night before flying out on September 24.)

Next day we’ll visit the fabulous Hassan II Mosque, at seaside Casablanca. The mosaics inside and outside are exquisite and the statistics of this enormous construction are stunning: It is the second largest mosque in Africa and its minaret is the world’s second tallest at 210 meters. It can hold 25,000 people, has heated floors, and a roof that glides opens to the sky on warm days during crowded holidays. We’ll have a specialized guide for our mosque visit and she’ll explain it all. 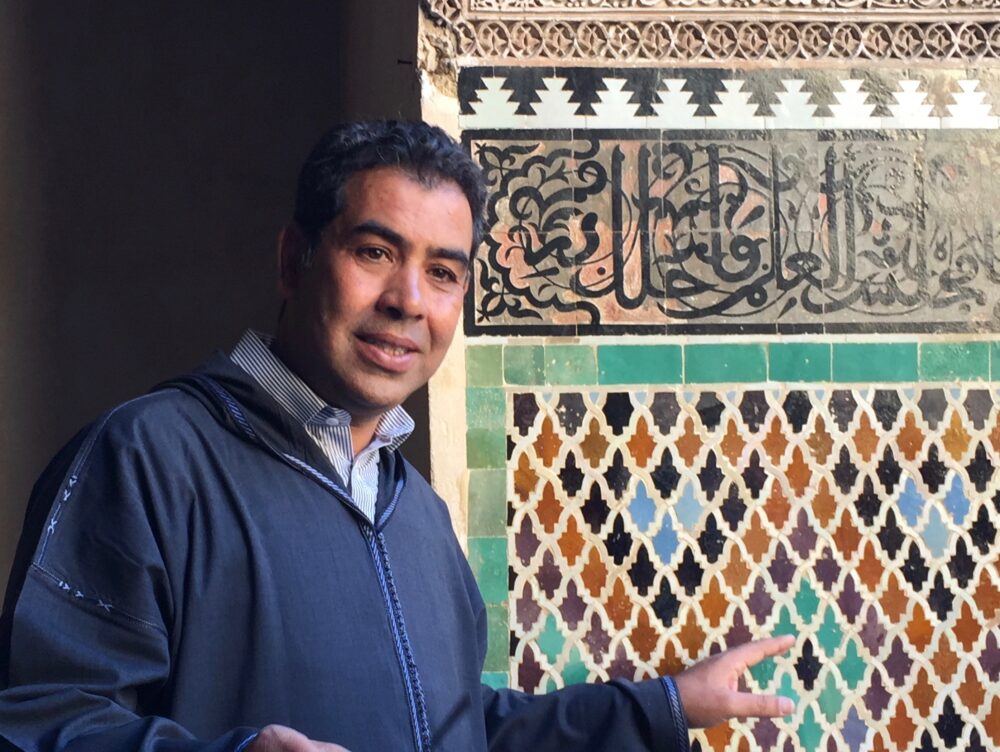 Next, we’ll hop in our Sprinter and drive south along the coast to El Jadida, an old Portuguese fortress town. The most exciting feature of the old part is the underground cistern with its striking mirror reflections between the water and the columns. Later we’ll arrive at the artists’ town of Essaouira. Our hotel is right above the ocean so you’ll have crashing waves to lull you to sleep.

Essaouira was famous as a hippies’ artist retreat decades ago, and some young Moroccans still make impressive artworks. My favorite painting in my home is by Youness Touil; see another example of his work below.

We’ll wander the old town and see crafts shops, as well as art galleries. After two nights here, we’ll head for fabled and friendly Marrakesh. In Neolithic times, the region was primarily agricultural, and it wasn’t until 1062 that the town of Marrakesh was founded. The red walls of the city, built in 1122–1123, and various buildings constructed in reddish sandstone during this period, have given it the nickname of the “Pink City.” 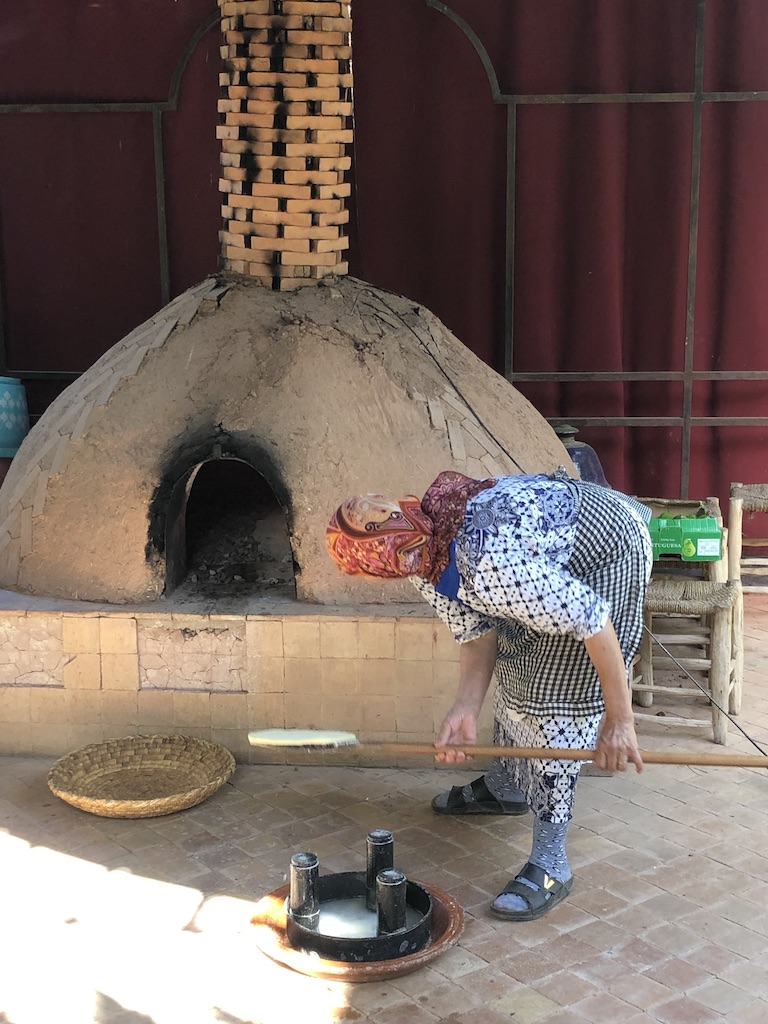 The baker at our cooking class shows us how to slide the dough rounds into the wood-fired oven.

Marrakesh grew rapidly and established itself as a cultural, religious, and trading center. Today the popular city has modern businesses on the outskirts, but still manages to feel exotic and other-worldly, especially in the old fortified city area, called the medina. The Marrakech medina is a densely packed, walled medieval city with labyrinthine alleys where little market shops offer a treasure of traditional textiles, baskets, felted slippers, pottery and jewelry. Here we can meet master artisans at work, and wander the narrow, cobblestone streets of the market.

In Marrakesh we will stay in a beautiful and comfortable riad, as always decorated with traditional furniture, rugs, mosaics, and textiles of Morocco. We will be the only guests there, like living in a private home!

One morning we will have a professional cooking class, then eat our delicious creations for lunch! We will also see the stunning Majorelle Gardens begun by French painter Jacques Majorelle, and the excellent Museum of authentic Berber jewelry, clothing and textiles. Lunch that day will be in the  garden patio of the museum.

In the bustling open-air square called Place Djemaa el Fna, snake charmers vie for space between barbeque stands, musicians, and water sellers. Declared a UNESCO World Heritage site in 2001, this central square of Marrakech is chaotic and thrilling at the same time. Shopping nearby is also good. 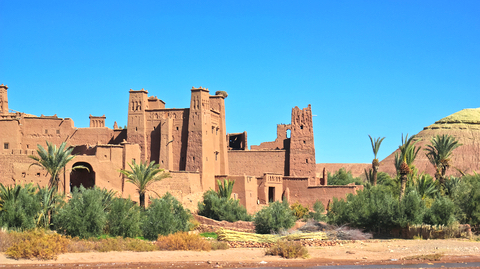 After a few days, we leave Marrakech and drive over the Atlas Mountains to Ouarzazate. In this area we’ll see more textiles in the form of carpets, as we visit some women’s groups of rug makers. Along the way, we’ll see the mystical ‘mud castle’ at Ait Ben’Haddou. A striking example of the architecture of southern Morocco, this spectacular ksar or fortified city makes an interesting stop. This group of earthen buildings surrounded by high walls is another UNESCO World Heritage site. The earthen castle effect and the decorative motifs sculpted into the reddish adobe walls make Ait Ben Haddou an aesthetic wonder.

In Ouarzazate we can go through the quirky Museum of the Cinema. Dozens of ‘swords and sandals’ films have been made in this desert area. For instance, Ben Hur was filmed here, but also Cleopatra, Gladiator, and Lawrence of Arabia were set in this desert landscape. We’ll also drive through the spectacular Todra Gorges, carved by the forces of two rivers, the Todra and the Dades, and spend several days relaxing in this beautiful area. 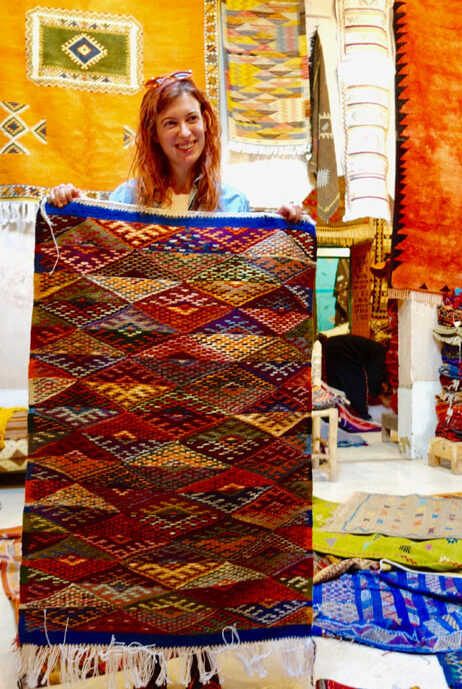 We’re delighted to partner with Barb Mackraz, the founder of the California-based Olive Seed Morocco Library project to donate books in English to school libraries. Barb has organized libraries in remote places where there were none. In one area, we’ll donate books at a new school library! Both our guide and driver have teenagers (in the city of Fes) and are thrilled to see the advances made by reading and writing programs in these remote under-served villages. We hope you’ll bring some books for teens, to contribute to the Olive Seed library project. According to our itinerary and the need, Barb will plan our visit to a new school library that needs books.

Next we’ll drive north into the mountains to experience Berber culture. A Berber cooking class and yummy lunch with a local family will contrast with our Marrakech cuisine experience. Then we head inland to Midelt, land of fossils and minerals. You can buy some beautiful crystals and trilobites, ammonites, or other fossils. Here we’ll have tea with a group of women in a textile cooperative and see their creations. Next day we’ll head to the Swiss-influenced town of Ifrane, where we always stop for a tea break with flaky European-style pastries. 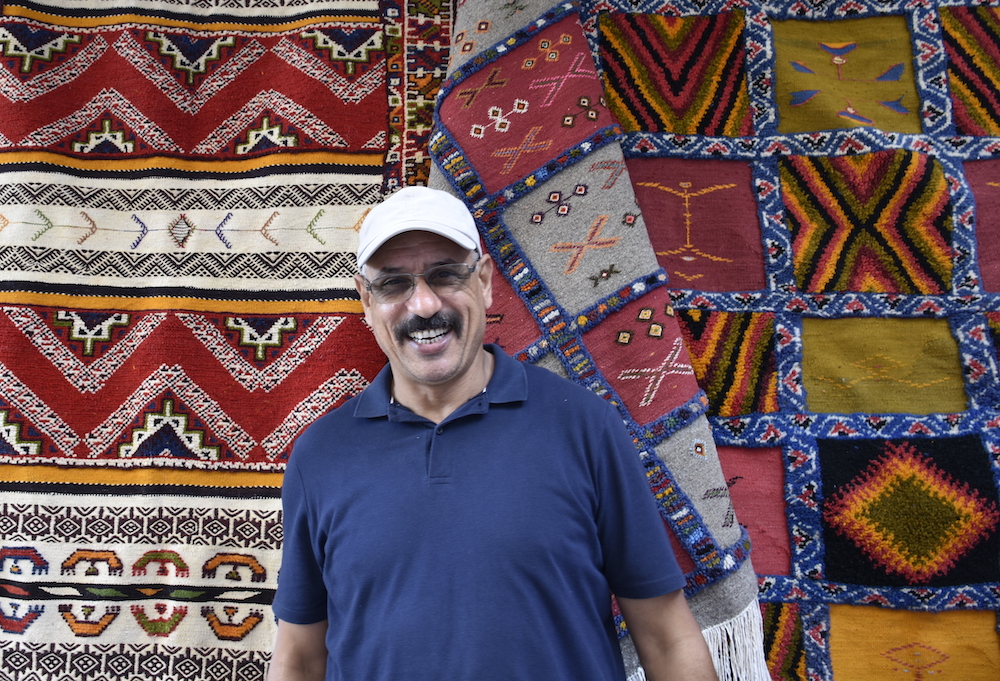 Our wonderful driver Abdel, with some nice carpets.

That evening we’ll arrive in Fes, a delightful city with over a million inhabitants. But it’s primarily known for its ancient sprawling, medina or walled city, the best-preserved in the Arab world, and another UNESCO World Heritage site with an authentic old world ambiance. Our charming riad has zellij walls and only 8 rooms, all for us!

Fes was founded in the 9th century and reached its apogee as the capital of the Marinid Dynasty in the 13th and 14th centuries. Major monuments in Fes date to that era. It also hosts the world’s oldest university, University of Al Quaraouiyine. We’ll spend several days in Fes, sleeping in a charming riad in the old medina area, and explore the mosques, madrasas and souks with their highly decorated mosaic walls. This medina is much calmer than the one in Marrakech. Craftsmen still work and sell their products here, and like others, this medina is divided into areas by trade—the leather crafters, ceramicists and so forth. Wander in the medina to find traditional arts of Morocco: carpets, leather slippers, brass lanterns, or antique silver jewelry.

We’ll tour a large ceramics factory in Fes where the craftspeople still hand-paint plates and vases, above. Other workers there paint tiles and fire them, then cut the intricate glazed tile pieces for zellij – complex mosaics composed of tiny geometric shapes – used to decorate walls, fountains and floors of mosques, madrasas (Koranic schools) and villas.

Next day, we’ll head east to Volubilis, another UNESCO site. Volubilis contains essentially Roman vestiges of a fortified city built on a commanding site at the foot of the Jebel Zerhoun peak. Covering an area of 42 hectares, it is of outstanding importance demonstrating urban development and Romanization at the frontiers of the Roman Empire. 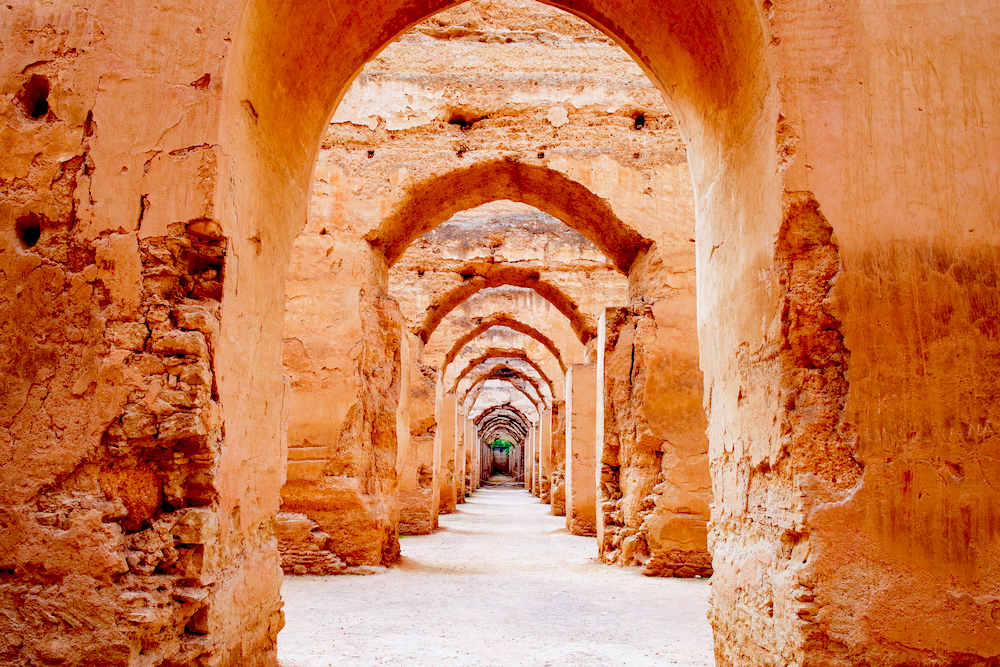 Royal stables and granary in Rabat.

Because of its isolation and the fact that it had not been occupied for nearly a thousand years when excavations began, it presents an important level of authenticity. (UNESCO info) There is a good site museum that displays some of the artifacts found also. We’ll have lunch nearby in town then continue on to Rabat for the night. Next morning we’ll visit the royal stables and other monuments before leaving town.

Finally we drive a couple of hours back to Casablanca to our hotel; the rest of the day is free to pack up suitcases and/or explore the city. September 23 is our last included night of hotel. At the Farewell Dinner, we’ll take leave of old friends and new and then get a good night’s sleep.

Breakfast at the hotel if it fits with your schedule, then we’ll take you to the CMN airport for your flights home from Casablanca, the next morning/day of September 24.
After the trip, you’ll receive a photo journal book to remember your trip. We welcome your photos to add to the book, so after the trip, send us some great group people pictures to be included. 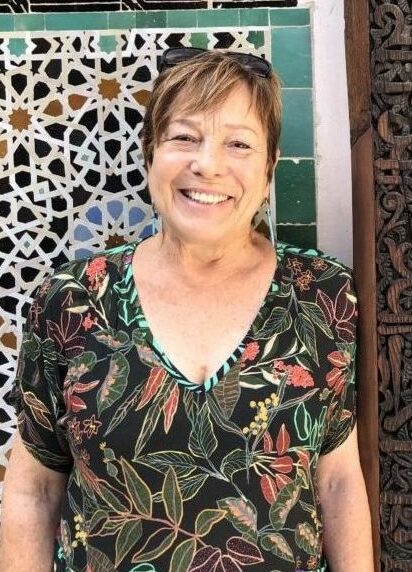 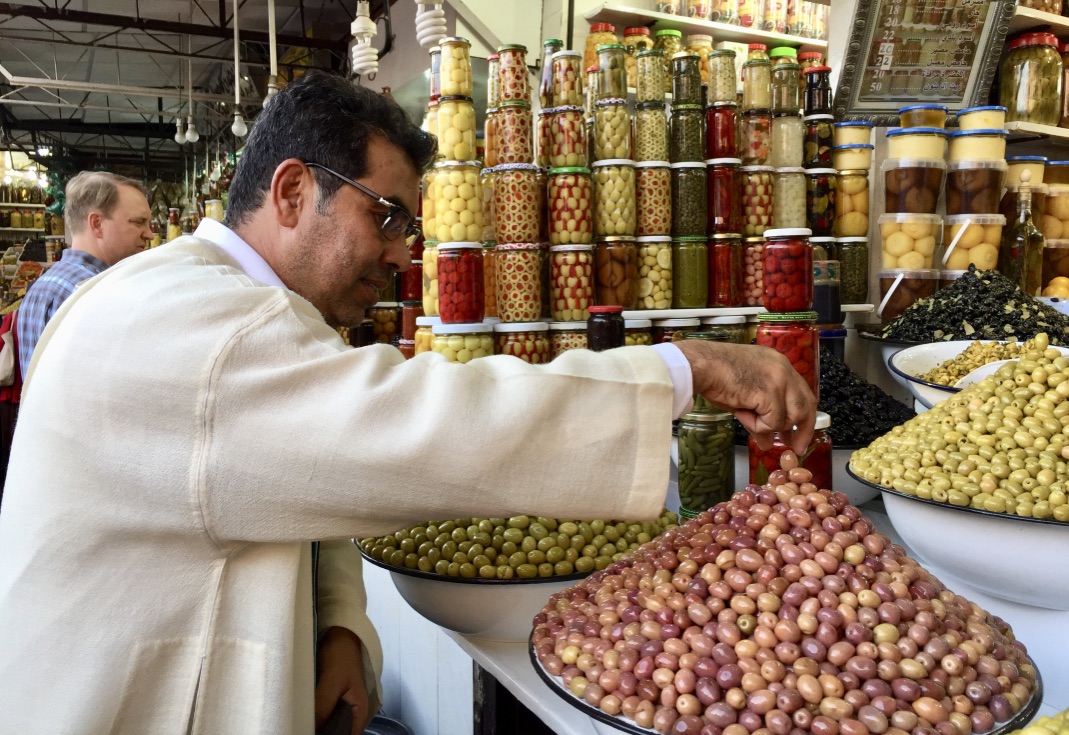 Personal items, visits to sites or activities not on the itinerary, between-meal snacks and bottled water when not in the van. Early arrival/late departure (on another day) airport transport is extra.

Note that not all hotels have hair dryers. Bring a dual-current hair dryer if you really need one.

*If you don’t want to do the cooking classes, the meals included during class time are on your own, since class participants will eat what they create. Cooking classes are lots of fun, but optional; we hope everyone will join in!

Please note that citizens of the USA, Australia, New Zealand, Great Britain, Canada, and many others do not need a visa to enter the Kingdom of Morocco and may stay up to 90 days.