Uzbekistan is famous for intricate embroidery, typically done on large pieces of cotton or silk cloth and mostly used as wall-hangings called palyak, or suzanis. Traditionally embroidered pieces form a large portion of a girl’s dowry.

Girls began their dowry collections by learning embroidery techniques from older sisters, mothers and grandmothers. Often several women in the family worked on the richly embellished pieces, which were often too complex for one woman by herself. A small area was always left unfinished – not as some think to show that only God makes perfect things, but so that the bride could put the finishing touches on it herself.

Newlyweds typically hung these symbolic embroidered panels on the bedroom wall to decorate the room, adding color and cheer. Panels hung between beds in a common sleeping room could also offer a bit of privacy to the couple. Embroidered bedspreads (called gulkurpa), bed coverlets, and quilt covers also formed part of a girl’s dowry.

Each area of Uzbekistan has its own particular design configuration and stitching technique. For instance, in Tashkent the entire background is solidly embroidered, with of course the embroiderer’s own take on traditional colors and compositions. Typically stitched in dark red, medium red, and black with touches of white, Tashkent suzanis are easily recognizable.

In other towns, the embroidery forms positive symbolic patterns as positive shapes on a plain ground cloth of ecru or another solid hue, so that the background color becomes part of the composition. Rosettes constitute common motifs here too, and represent the sun and the moon, as a stylistic representation of the universe and creation. Stars (yulduz) stitched within the rosettes represent starry skies, most commonly found in the stunning Tashkent suzanis.

The embroiderers’ artistic skill and inspiration result in a fabulous variety of different suzani compositions. The overall style depends on her tools. Women use two main tools to embroider: a needle (bosma) or a small hook called a tambour hook or yurma.

The needle can be used for a large variety of stitches. The hook makes a continuous chain stitch by holding the thread under the work and piercing the cloth and bringing up a loop, each into the next one.

By the 1980s, the popularity of Tashkent style suzanis was waning; craftswomen were instead reviving embroidery styles from Bukhara, Shahrisabz, and other areas. This may have been because of the labor-intensive Tashkent style of completely covering the background with stitches, or because the other styles allowed more freedom of forms and colors.

Nowadays Uzbek women adorn jackets, pillow covers, and purses with finely embroidered designs too. “Suzani” means needlework, but the word is typically used for hand-embroidered wall-hangings. In Bukhara, at the Emir’s Summer palace, a huge collection of vintage suzanis covers the walls in the Suzani Museum. Many of the photos here are from those excellent displays.

Today, a young woman named Medina Kasimbaeva is famous for having revived the Tashkent style of suzani embroidery. She dyes her own silk thread and the subtle hues add to the rich textural quality of her work. We will see some of the intricately embroidered silk coats, jackets and pillows that she makes. Her needle art has been purchased by textile collectors from around the world. She also teaches young women how to make the best Uzbek needlework, and how to use their own visions to create new compositions within the boundaries of tradition.

Visit With Talented Artisans of Uzbekistan Yourself

Go behind the scenes for a once-in-a-lifetime opportunity to see and participate firsthand as hand-embroidered suzanis and hand-dyed, handwoven ikat textiles are created. Join Behind the Scenes Adventures on our next tour of this amazing destination.

See Our Tours To Uzbekistan 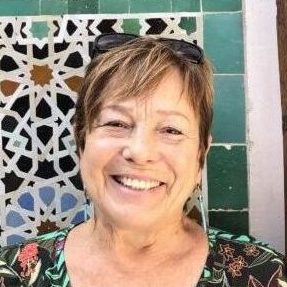 Resist dyeing or ikat is known as mat-mi in Thailand and mud-mee in Laos and...

Despite dire predictions to the contrary, knitters in both Peru and Bolivia continue to create...