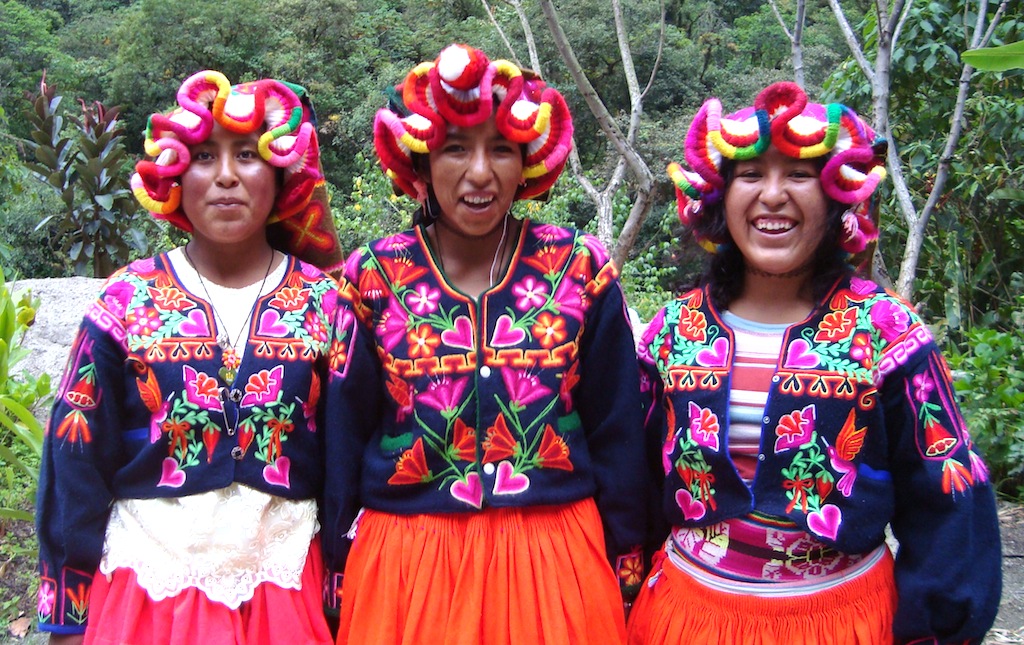 Girls from a village near Lake Titicaca (Peruvian side) pose with ruffled bonnets and embroidered jackets.

Despite dire predictions to the contrary, knitters in both Peru and Bolivia continue to create amazing work. In fact, in many areas, Andean knitters now knit with finer stitches and more complex patterns than in the past.

They make tiny, tight stitches and employ complex knitting techniques that are often unknown outside of the area – techniques so unusual that when I wrote Andean Folk Knitting: Traditions and Techniques from Peru and Bolivia, I had to invent names for them! 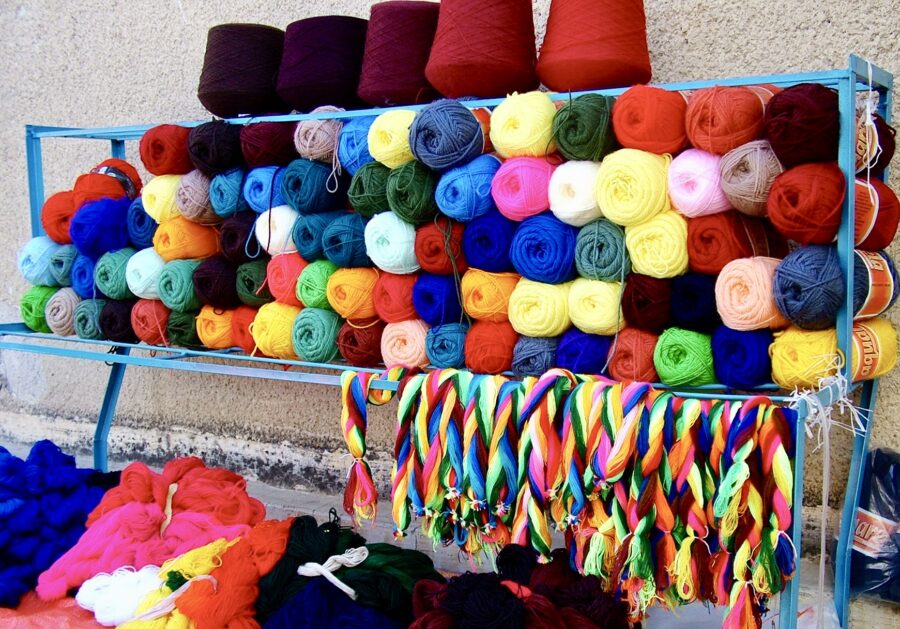 An infinite variety of intricately-patterned caps, called chullos, are the most common knitted items. Andean knitters in some areas also make traditional patterned arm-warmers and colorful legwarmers which the men wear for festival garb.  And women in Peru and Bolivia knit beautiful sweaters for sale to tourists – or for themselves, their men and their children.

In most of the Andes, only men wear the knit caps or chullos. But there are a couple of places around Lake Titicaca where little girls and adolescents wear a ruffled version. Men often knit the chullos, for themselves and their sons, using a set of five very thin double-pointed needles. Because many villagers live far from markets where they might buy factory-made needles, they often make their own knitting needles out of baling wire. They cut lengths of fine, semi-rigid wire, straighten the pieces, then file hooks into the ends. The hooks make it easier to pull up the stitches on their very fine, tight work. (I have heard that some men make their needles from bicycle spokes, but have not seen that myself.) 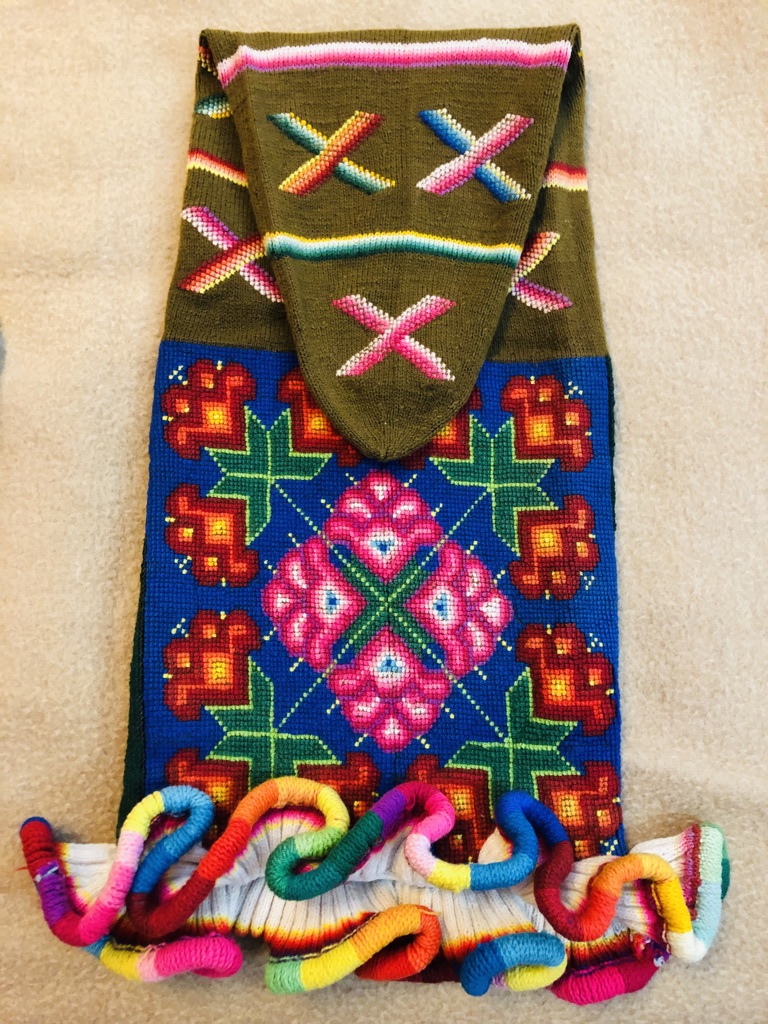 Nowadays, the men make their own traditional caps from factory-spun synthetic acrylic yarn, manufactured either in Peru or Bolivia. These colorful yarns are fine, inexpensive, and available in local markets in a wide range of hues: a logical choice for people who otherwise would have to round up a sheep or alpaca, shear it with ancient dull scissors, then clean, spin and dye the fiber, before even beginning to knit.

Andean knitters work with four needles arranged in a square, pulling up stitches with the fifth needle. They usually work in stockinette stitch around in a spiral, called “circular knitting.” The knitter working on the cap above is using thirty-two separate little balls of bright acrylic yarn, eight color changes per needle!

In some areas around Cuzco, Peru, knitters working with revitalization projects have been encouraged to use sheep’s wool or alpaca hair with natural dye materials. Tourists and textile collectors often prefer the more subtle tones made with leaves, flowers, cochineal insects and lichens, so these items sell well.

But for their own use, the indigenous people prefer the clear, bright colors of acrylics. The knitters typically pass the working yarn around their necks to maintain an even tension. In other places, they work from the inside and purl all the stitches.

Around Cuzco, knitters have developed an ingenious technique: They make charming caps, mostly for children, that are  embellished with finger-crocheted “popcorns,” called grumitas (lumps/bumps) or kurpas (Quechua). 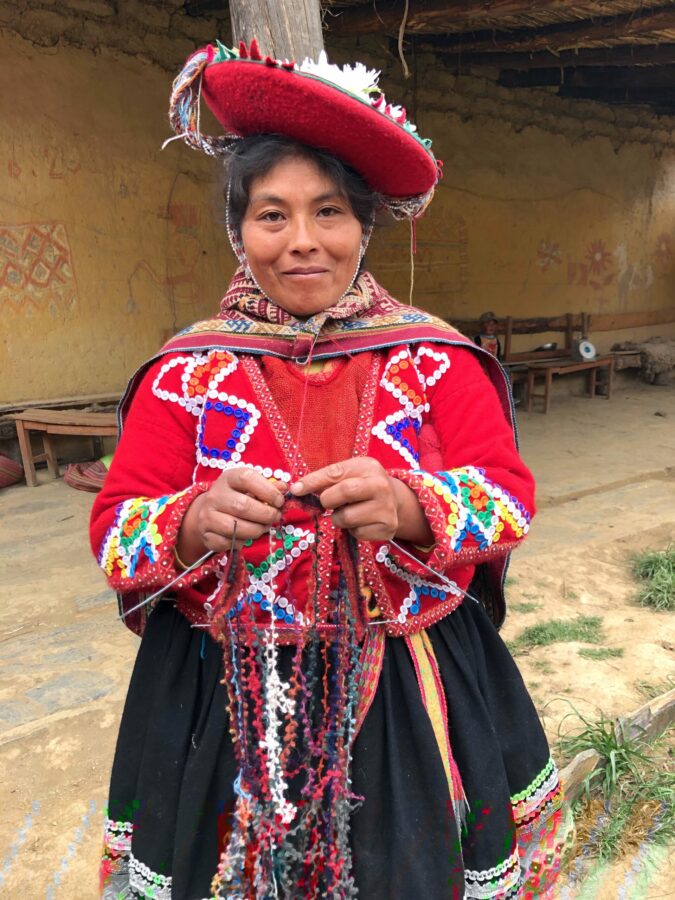 Both men and women can walk along and loop up the tiny bumps along their yarn, seemingly not paying attention at all. When they have made yards and yards of bump-studded yarn, almost like a novelty yarn, they will knit a cap to embellish. Working with one base color such as red, the knitter works in the bumpy yarn as a separate element.

The bumps form patterns as they knit in the extra yarn. Some knitters finish a whole cap first, then working with the bumpy yarn from the inside, pull the colored popcorns through to the front of the cap in pattern shapes; see photo. 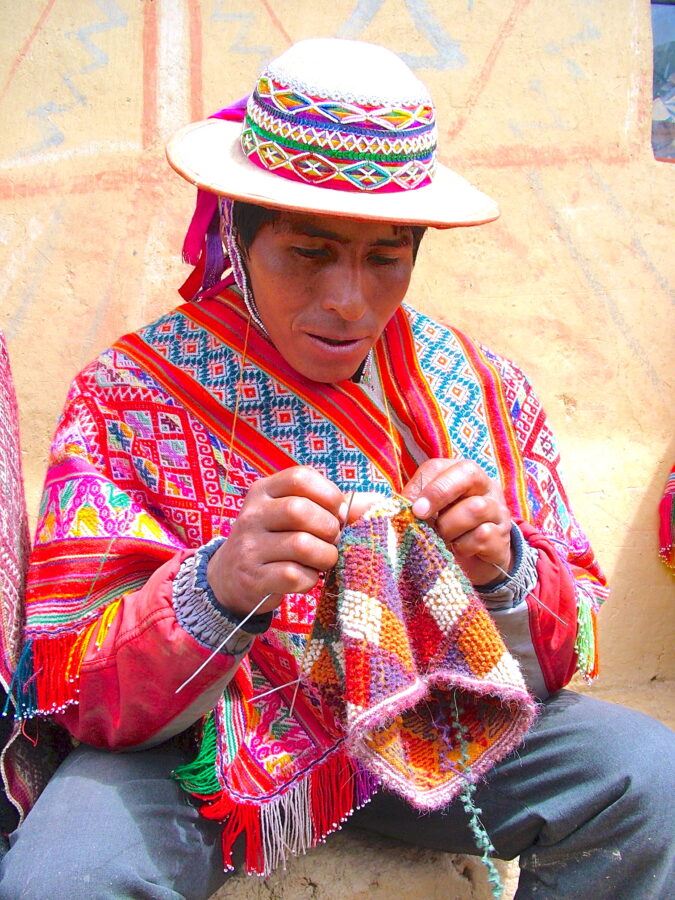 Andean knitters have invented many earflap variations and many unusual methods for joining the different colors of yarns as they knit.

Occasionally knitters make colorful patterns with knit and purl stitches, for example the purled checkers done in different colors around cap edges or earflaps.
However, most patterning is done with color changes, often in complex intarsia techniques. Bolivian knitters in particular don’t like any floats on the insides of their caps; as they work, they twist the working yarn with the running yarn at every stitch, so that the inside of the cap is almost as pretty as the front. See the colorful example at left. Note that this masterpiece has three colors carried all around it, in very complex color and motif arrangements! 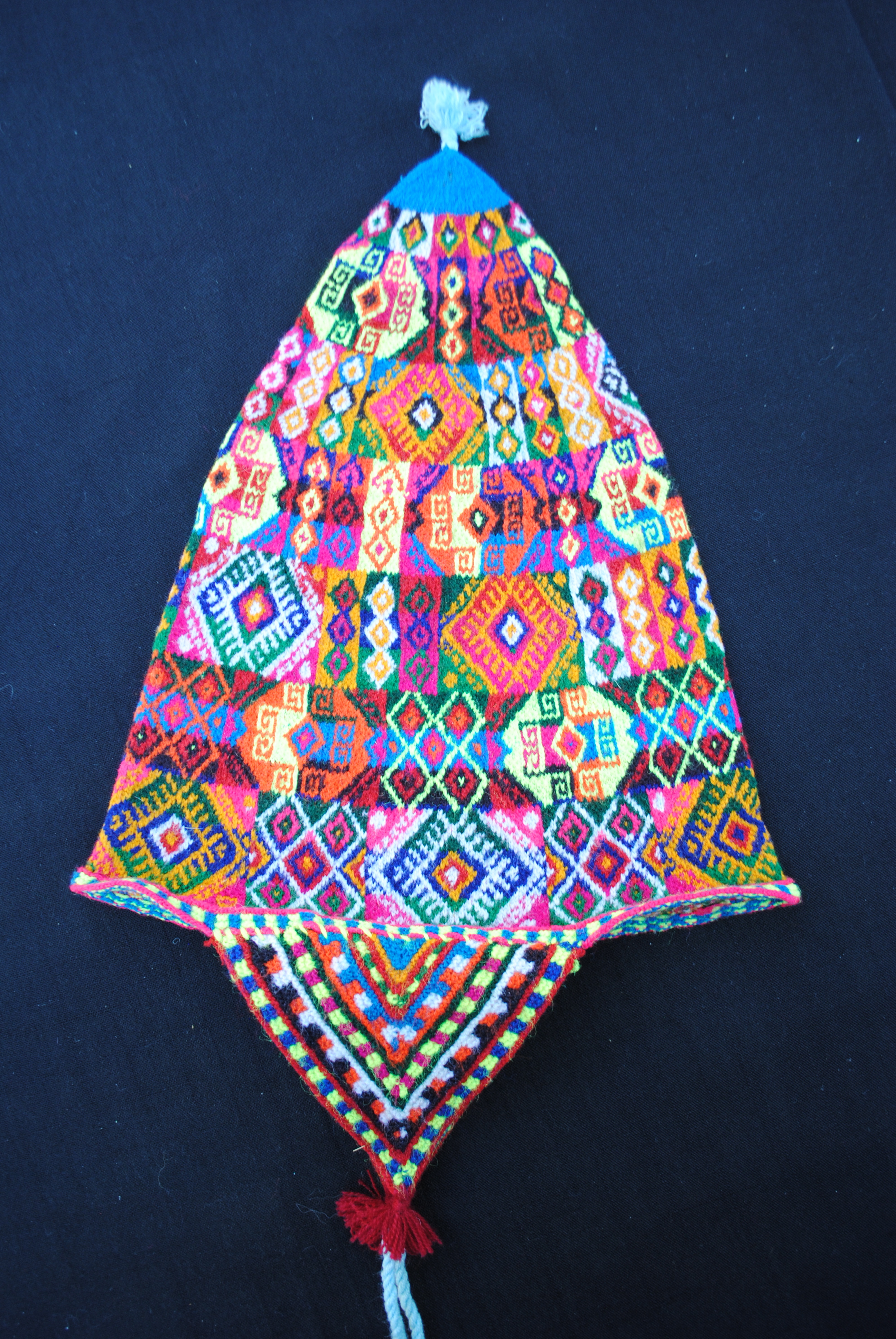 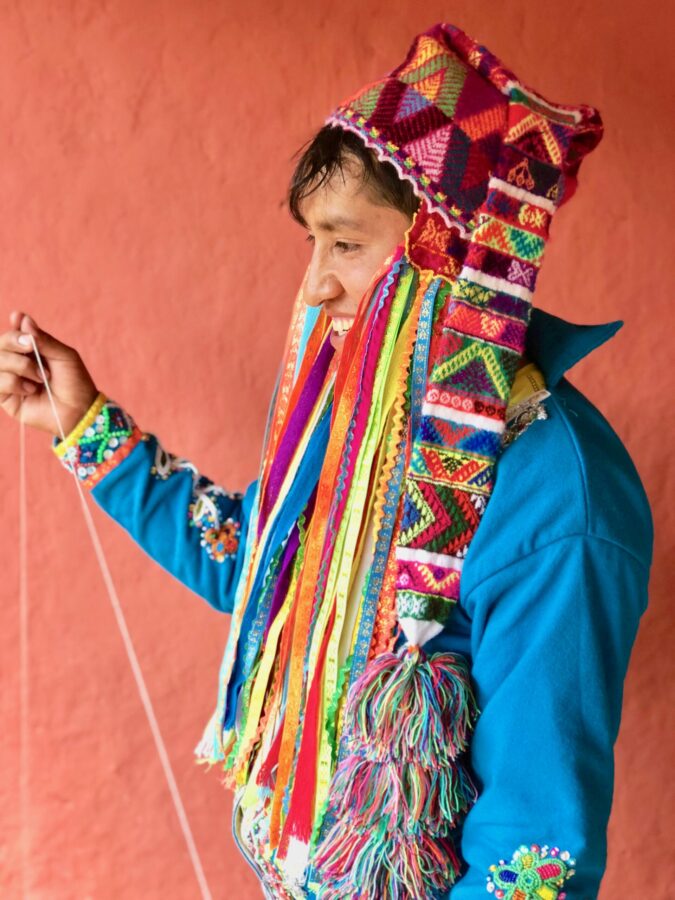 These are too complex to explain here, but if you join us in the Andes, you will see these marvelously talented knitters (as well as weavers, spinners and dyers) at work. You can even sit down at their feet in the grass and ask them to work more slowly, like Mary Jane Mucklestone does, to learn their techniques!

During a trip with Behind the Scenes, you and I will visit remote villages where we will meet knitters and spinners (and weavers and dyers too) to see examples of their exciting work and to learn about their techniques. In many places, you may buy things directly from the people, which helps them to improve their standard of living.